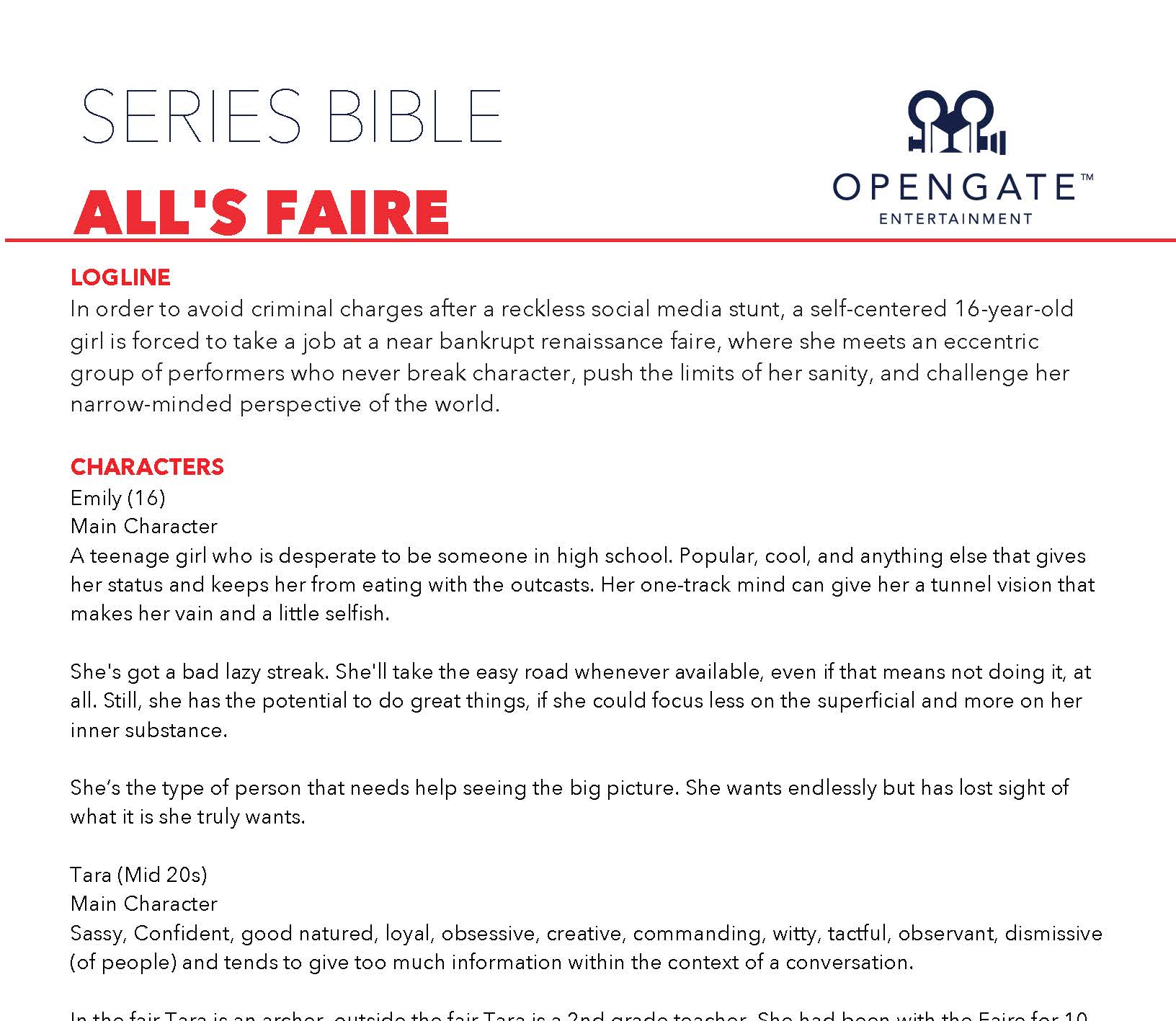 How to Write a Great Series Bible

By OpenGate EntertainmentFebruary 1, 2022No Comments

A series bible is an important pitching document that highlights what your TV show is about and shows longevity for any future seasons. This document includes a logline, series synopsis, pilot summary, character breakdowns, and plans for future episodes and seasons. Having a great series bible will help your show stand out among the competition.

Here are a few tips on writing a great series bible:

Have a killer logline

Your logline is your 1-2 sentence pitch that will hook your audience. Use visual and active language to show your world and your compelling characters. The logline can entice an Executive to want to read your script.

Expand on what will happen in the first season, as well as additional seasons in the show. Show us any character and series arcs that will help grow the world in your series. Excite your audience as they learn about what’s to come.

Explore all of the important moments in the pilot and what will make us want to watch more. Introduce the main characters and hint at their development that will occur beyond the first episode.

Help us fall in love with the characters

Your characters are often how the viewer bonds with the series. Reveal what each character wants, and the great lengths they will go to get it. Define their wants and needs, and show us how their character will arc throughout, not only the first season, but in following seasons as well. Describe their relationships and how those characters add depth to one another.

Explore how the world can live past the first season

Show the world and introduce how your characters will evolve in it. Explore how this world can sustain multiple seasons and why we should be interested in watching this show on a weekly basis.

Show your skills as a writer

The Series Bible will often be your first impression to an Executive of your skills as a storyteller. This is your opportunity to show them you understand the undertaking of creating a successful TV show. Help the reader grasp the entire concept of what your show is and where it could go. Excite the reader and make them hungry for more.

Match the tone of the script

Carry over your genre from the script to the series bible. If your show is a comedy, make it funny. If it’s suspenseful, give the Exec a thrilling synopsis to read. Most importantly, make sure to be clear about the emotional core and character arcs in your series. This will help you focus your vision and pitch to the right networks.

Convey the theme of the show

Ultimately, what is your show about? What do you want to say about the world, or what do you want your characters to learn? Show the characters exploring a theme that can help carry out multiple seasons of the show.

Final Tip: Have fun and make your series bible memorable!