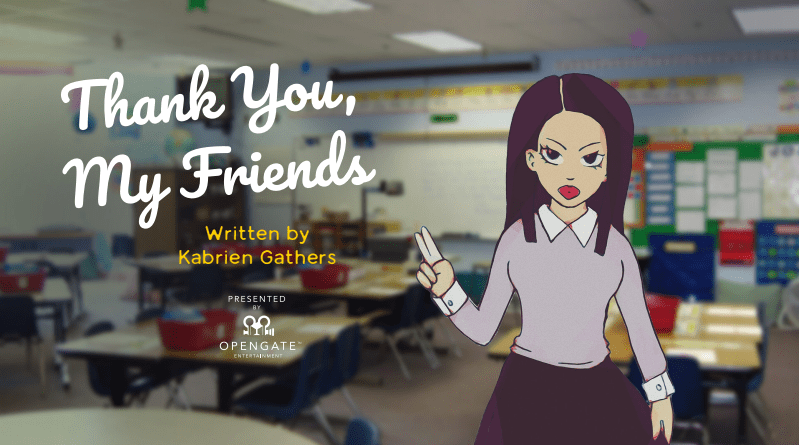 At twenty-five years of age, New York native Kabrien Gathers is already working on his first series. Tentatively titled Thank You, My Friends, the show grew from a straightforward adaptation of his own high school experiences into a sprawling, ambitious panorama of suburban life that follows the stories of four multiracial, multicultural women and their families. Ever since his laptop crashed, he’s been writing the show in the mobile app version of Celtx screenwriting software, which is the most determinedly badass (or badass-ly determined) thing any writer has ever told me by a long shot. In this exclusive interview, Kabrien opens up about his passion project, offers quality advice to aspiring writers, and wonders what the future might hold for him.

Tim: Where did the concept come from?

Kabrien: A few years ago, my friends and I wanted to create a TV show about our lives in high school, but we never went through with it. I’m a writer by nature, I go to school for writing, I’m majoring in creative writing. Ideas are always flowing through my head. One day, I was watching The Golden Girls and I thought, Oh, this is pretty funny; what if I make a show like this, but make these characters younger?

Tim: When developing a sitcom, it’s important to give your main characters personalities and traits that distinguish them from each other, that put them in conflict with one another. Looking at your one-pager, I see that you were very conscious of this, as the four women who make up your main cast couldn’t be more different from each other. Was that always going to be this way?

Kabrien: Yes. The only difference was that one of the characters, Wendy, her name was going to be Susan, and she was going to be married to another Asian man, but I decided to have her marry an African American man.

Tim: I spoke with someone last month who told me they had a screenwriter friend who was writing a movie about a female athlete. Although it was an amazing story, he could not sell it to anyone because he himself was a dude. I think you’re in an interesting place with your own script, given the current state of the entertainment industry. Producers are looking for racially diverse casts and stories, and you definitely deliver in this department. That said, they also want those stories to be written by people who match the demographics of their characters. Right now, it’s just you working on this. Have you thought about bringing in other writers?

Kabrien: I have thought about it. I gave my characters many different occupations and ethnic backgrounds, and, you know, I’m a 25-year-old African American male; I don’t know about many of these occupations. Like Marvella, she’s a prosecutor. I do not know much about being a prosecutor, so I will probably have to get outside help to bring in information about prosecutors. In terms of ethnicity, Wendy is Asian and Diana is Dominican. I would  like to have them speak their native languages at home. But again, I do not know those languages.

Tim: Anyway. You mentioned that Thank You, My Friends got started with you and your friends wanting to make a show about your experiences in high school. As the story slowly moved away from you and more towards these four women, did you continue to draw from personal experience, or imagination become more important?

Kabrien: Some of it is based on personal experience, but I’m exaggerating. The children of the four women, they treat each other like cousins. When I was growing up, I used to go to my grandmother’s house a lot, and all of my cousin would be there. Each of us was a different age and had a different personality, but we always had fun when we got together. You never know what will happen when you interact with this cousin or that cousin. There’s this unpredictability.

Tim: The four main women alone make for infinite story material. But on top of that, you also aspire to tell stories about their partners and their children. This is not only ambitious, but it fleshes out the wider world, the community, in a way that most sitcoms — which tend to feel isolated from society — don’t. What kind of place is Flaretown?

Kabrien: I’m struggling to make it a specific place. It’s somewhere inside the U.S. It’s a city, with a bar, and there’s suburbs. It feels sort of like New York City. It has a tourist area with shops and brunch spots.

Kabrien: The plot of an episode, it comes easy to me. But then actually writing it out, that’s harder because I have so much I want to say, and I have to connect everything so that it flows. Sometimes I just sit back, close my eyes and meditate, playing out a specific scene in my head. Then, when it’s clear to me, that’s when I start writing. I don’t have a laptop, so I usually do the writing on my phone, on Celtx. Sometimes I write out the episode in my notebook like a treatment. That’s where I get into the dialogue and action, and my dialogue is pretty good. I have a creative writing major, and have taken many classes that instructed me on the writing process. I apply what I learned in school to my own project.

Tim: Did you just say you use Celtx on your phone?

Tim: I got so much respect for that. The program drives me nuts, and I’ve only ever used it on my desktop. I can’t begin to imagine what it must be like using it on a phone.

Tim: Were you able to recover them?

Kabrien: No. But those scripts, they weren’t important because they were from when I first started writing the story. Thank You, My Friends is completely different now. Originally, Charlotte’s husband was going to be killed. It was going to be more of a mystery, but then somebody said it was too similar to that Netflix show, You.

Tim: If you could give any piece of advice to the person you were when you first started writing, what would it be?

Kabrien: Listen to criticism, not just from your peers but from other writers, because they know what to look for in a story. I have had classes where I write stories and my peers will  point out things like, Oh, this doesn’t make sense. Why did this character do that? You can get caught up when you’re writing, and then you miss out on stuff, so it’s nice to have an outside source.

Tim: I wish I would have taken that advice when I first started out. I don’t know about you, but I had quite an ego when I was younger. I wrote a lot, but never shared it with anyone. And because I never shared it, I was never criticized, and because I was never criticized, I sort of got it into my head, if only on a subconscious level, that I was a great writer. That preconceived notion of myself got in the way once I went to college. It prevented me from taking criticism, and it made it hard for me to establish friendships with other writers.

Tim: Anyway, since Bubbleblabber is all about adult animation, I probably should address the elephant in the room. Thank You, My Friends would make a great live-action sitcom. Why make it animated?

Kabrien: Some of the storylines I planned for the episodes are kind of over the top, which makes me think animation would be a better choice. Also, I could not really picture people to portray my characters. I had to draw them up in my head, and if they’re animated they’ll always stay the same age.

Tim: A few weeks ago, I talked to the creators of Corner Gas Animated, which is a Canadian show that was based on a live-action sitcom. The creators, they told me that they made the switch to animation partially because it allowed them to write more over-the-top storylines, just like you put it. So to follow up on that — if you could strike a deal with any network, streaming service or whatever in the world, what do you think would be the best home for Thank You, My Friends?

Kabrien: I believe it can fit in with Netflix, because Netflix has all these categories, like anime, adult animation, strong black lead. Whatever the category may be, I can picture it on Netflix. I actually would like my show to be syndicated on a cable network, too. I don’t know which one. Maybe Cartoon Network or Comedy Central.

This interview was edited and condensed for clarity

This Interview Originally From BubbleBlabber