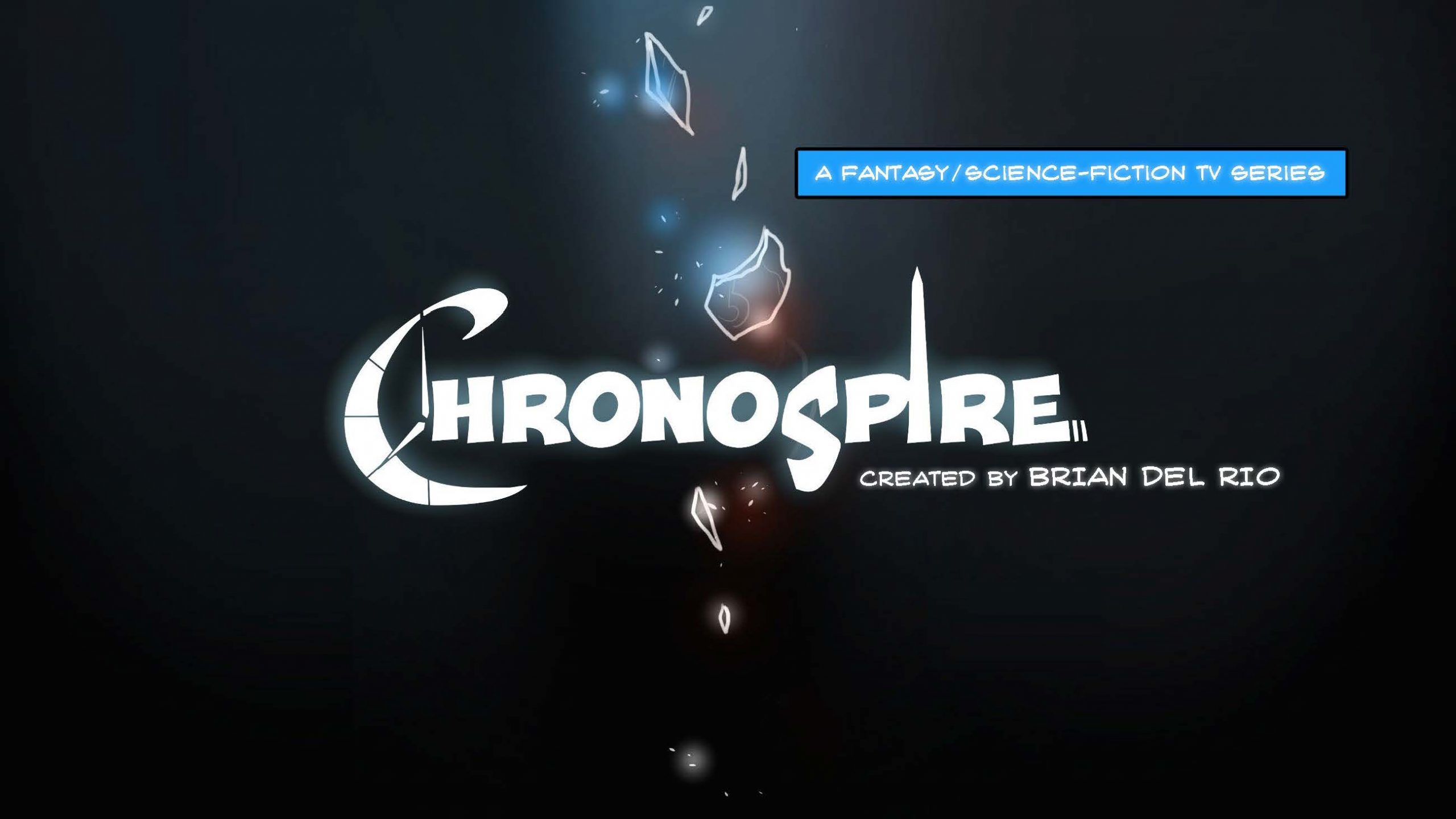 Original Article Can Be Viewed Here

The fantasy genre may be popular, but it doesn’t exactly sport a lot of variety. Most stories, taking after textbook examples like The Lord of the Rings—which in turn took after Christian myths and Euro-centric legends—feature classic battles between good and evil, with the elves pitted on one side and the orcs on the other. When George R.R. Martin came along with his A Song of Ice and Fire in the late nineties, that ethical distinction was cut up and blended to form one big pot of morally grey soup. Still, there were certain ancient fantasy tropes that stayed, like, for instance, the medieval setting, sporting worlds that were suspended in both space and time. In this exclusive interview, comic book artist Brian del Rio divulges the trials and tribulations of bringing progress to the fantasy genre through his monumental series, Chronospire.

Tim: This is a story of tremendous scale and scope. It’s fantasy, science fiction, action, adventure, and time travel all melted into one, which can be a bit overwhelming to new audiences. How you would summarize Chronospire to newcomers?

Brian: The logline I like to use is this: an elven scientist builds a time machine to prevent the end of the world, but in the process accidentally awakens an ancient force of evil. The core of this story is a journey of grief and acceptance. I tried to create an interesting world, but I think the characters is the device that hooks people and once you’re in for the ride you learn about the surroundings. Less data-dumping, more experiencing.

Tim: I want to go back to the topic of data-dumping in a moment, because exposition has always been the bane of fantasy writers and I would love to hear more about how you navigated this challenge. But before we go there, could you maybe tell me a bit more about the lifespan of this project? How did it all begin?

Brian: The idea first occurred to me — I want to say 2011-ish. I’ve always been making projects, always putting stuff together, My brother programs video games on the side and I got this idea for a video game that, at the time, I called “The Obelisk.” I grew up with a lot of the real-time strategy games like Age of Empires, and I feel like, at a very young age, that evolving nature of civilizations was planted into me — Stone Age, Tool Age, Bronze Age. I was very interesting in seeing how society progressed over time, and couldn’t help but think in those terms while I was watching something like The Lord of the Rings. That story took place in a sort of medieval, renaissance era. There was a part of me that asked: well, what came before that? What did these settlements look like in the Stone Age? What are they going to look like in the future? How would the Industrial Revolution impact Middle-Earth? Basically, I was looking for a project that was going to be an excuse to draw the gamut of history, but in an interesting way.

So that’s where it all started. I let the project linger for a few years, but always kept coming back to it and adding ideas. And then, as my own personal and political beliefs evolved, I wanted to tackle new subjects, and uncover their connection to historical events. A lot of that got cemented with my move to Portland, Oregon, from South Florida. When I first came out here in 2016, right after the election, there were a lot of protests related to immigration and such, and seeing a lot of that firsthand definitely left an imprint on the first part of Chronospire insofar as there’s in turmoil because of race-related issues.

Tim: It’s interesting to see how big an impact moving locations had on your work. I myself moved to New York that same year, after having spent the better part of my adolescence living near Atlanta, and I likewise felt that change impacted my creative writing. It gave me a clearer picture of the building blocks of a society, not just a community.

Brian: I was raised an Evangelical Christian. That was my circle. I listened to nothing but Christian music. And then, when I got into my twenties I thought this stuff doesn’t make as much sense to me anymore as it once did. And I switched to more progressive, humanistic, atheistic mindset, which was further informed by my move to Portland. In the story, that personal change in my life helped shape the relationship between the main character and her older self. I thought, what would my childhood, Christian self think of my adult, progressive self? The two wouldn’t have gotten along, and I was so fascinated by the idea of us being two different people at different points in our lives that I kept developing it.

Tim: As far as world-building goes, which writers, artists, and/or filmmakers were your biggest inspirations?

Brian: The Dark Tower by Stephen King made a huge impact on me. It was the first story I read that just completely ignored boundaries of genre. It started out like a spaghetti western, but somehow turned into the Chronicles of Narnia meets horror meets science-fiction…That really clicked with me. I was like, wow, there don’t have to be any rules; I can tell any kind of a story that I want to. That stuck with me over the years, especially when I began writing fantasy. I never understood why all these fantasy writers were telling stories about elves and orcs, but kept setting them in the same basic time period, 1100 to maybe 1300. What about the rest of human history? I want to see revolutions and colonization.

Tim: Have you ever seen Wizards by Ralph Bakshi?

Brian: I am familiar with Bakshi, but I haven’t seen it.

Tim: It’s one of the first films that blended fantasy with science-fiction, but it did not do so in a historically-conscious sense, like your work does.

Tim: We only have one history to draw from — our own. As such, any fictional story, especially one of the high fantasy variety, is bound to reflect our own past back at us. How did you work actual historical periods into the annals your fictional world?

Brian: We do all have one history. That’s true. If you’re talking about the human race in general. But per continent, per society, we have a multitude of histories. I was playing a game called Shadow of Mordor. Do you know it?

Brian: So I was going around, you know, hunting orcs, and it occurred to me that the concept of an orc — everything that our media has informed us about what an orc is — is “not Western.” Their look is reminiscent of the Mongolian Horde, tribal groups, while the elves represent European Christendom. As a result, orcs represent everything outside that. I couldn’t help but see that repeated in, in the art and themes of these stories.

In my work, I wanted to kind of challenge some of those notions. If elves are a kind of symbol for the European powers and imperialism, what does that mean for the outsider group? At one point in the Chronospire books we’re dealing with world wars, and I have the orcs representing the Axis powers, which were also Western and European. I explore the world wars as a setting so I could explore nuclear weapons and concentration camps. I have left-leaning values that come through in my work, but what I actually try to do is portray a situation, a people, and ask the audience to draw their own conclusions.

I would hate for people to walk away from a story and say, “Obviously the orcs were the bad guys and the elves the good guys.” I like to choose settings that allow me to highlight the grey-ness of the human condition.

Tim: I’ve talked to my fair share of fantasy writers over the years, and read a lot of fantasy. But, to be honest, you’re probably the first person I have come across that approaches the genre in this way. Where do you see this story going in the future?

Brian: It’s been released issue by issue. I’m already working on the next issue of the comic and am well into Volume Two. I knew from the start where and how it was going to end. Of course, I left myself some room to diverge, depending on how I end up feeling about how things should be explored. Ultimately, it’s a story about acceptance, and I originally pictured each season representing a specific period in the grieving process. The theme of the first book is  denial, followed by bargaining, anger, depression, and finally acceptance.

This interview was edited and condensed for clarity. More information about Chronospire can be seen here.